What Animals Can You Hunt at Night? 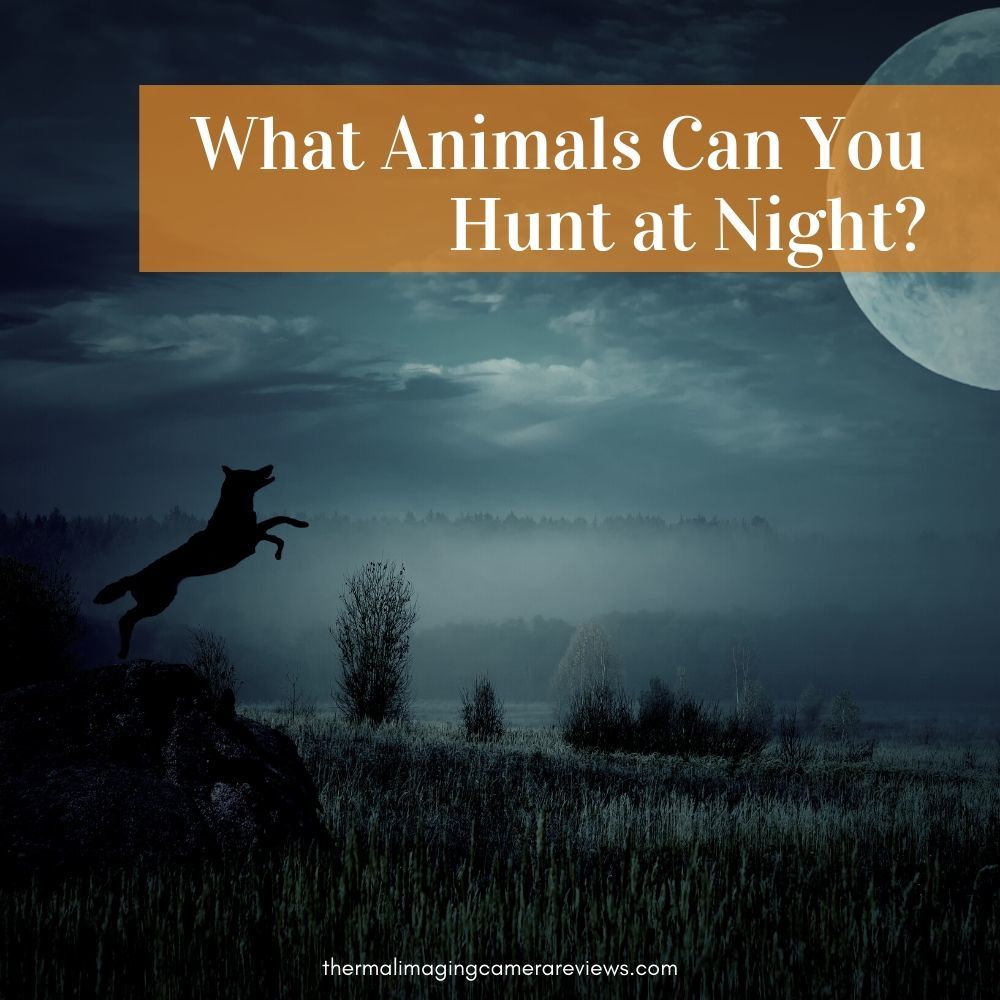 The general consensus is that hunting during the day is much easier than hunting at night. To some extent, we’re inclined to agree. After all, you do have better visibility on your side.

So what does it take to make a success of a night hunting adventure? Using a night vision thermal scope will definitely have things working in your favor. This is because these devices are designed to ensure visibility even during no to low light conditions.

Which brings us to our topic for today; what animals can you hunt at night? If you’re a novice hunter or if you’re generally looking to broaden your knowledge, this article is for you. We’ll be providing you with a list of potential prey you can hunt down at night.

Some animals are nocturnal meaning that they prefer coming out to play once the sun goes down—so why not play with them?

Many hunting enthusiasts will agree that coyotes are among the best and the most popular animals to hunt at night.

Fair warning: coyotes don’t make it easy for you to track them down. If anything, they’re tricky to set your sights on! But with the right thermal scope on your side, zeroing in on a shot will definitely make things a little easier for you.

Much like coyotes, raccoons are also very popular to hunt at night. And in most states, the hunting of raccoons is permitted. But be sure to double-check the hunting regulations in your area.

Hunting raccoons isn’t the easiest thing to do because they’re very smart. They’ve mastered the art of concealing themselves from humans.

It will work in your favor to use a thermal scope like the ATN Thor that allows you to view minute details of your target so you can better identify them. Either that or you must be very good at mimicking raccoon sounds that will attract them to plain sight.

Some people think that wild pigs shouldn’t be eaten but that’s highly subjective. If you have no reservations regarding eating this kind of “game pork”, you’ll be happy to know that wild pigs can be found in abundance during both the day and at night. Also, it’s always open season for these animals.

This is because wild pigs tend to reproduce on a large scale. And unfortunately, they’re known for causing extensive environmental damage. As a result, in certain states, it’s not just permitted but encouraged to hunt them down as much as possible.

Hogs are very popular prey for night hunting because that’s the time they feed.

Because of their relatively large population, you’re bound to find them in many locations. This essentially means that you don’t have to do any pre-scouting during the day for hunting locations.

But simply because hog hunting is popular across the US, doesn’t mean that it’s permitted in every state. Be sure to familiarize yourself with your local hunting laws to make sure you’re not caught on the wrong side.

If you’ve ever tasted deer meat then you’ll understand why deer hunting is so popular in many states. Even though you’ll find plenty of deer at night, they are extremely difficult to hunt. Why?

Deer have exceptional night vision, an incredible sense of smell and immensely sharp ears. They can hear even the slightest sound in the woods. Also, deer can smell you from almost a quarter of a mile away. This means that not only should you be very quiet but you also need to make sure that you’re out of sight.

In this case, having a riflescope with a long-range will work in your favor. You can still get a clear view of your prey from miles away without the risk of scaring it away.

After spending the day holed up in their burrows, rabbits tend to come out at night. These fast creatures won’t make hunting them down an easy feat for you.

You have to make sure to outwit them. First off, avoid having any form of strong scent that might give your location away. Also, try to be as still as possible to avoid scaring them off.

With rabbits, the type of equipment and technique you use will make the difference between a successful hunting expedition and a not so fruitful one. Ideally, you want a rifle scope with a high refresh rate that ensures no blurring even if you’re tracking fast-moving targets such as rabbits.

Foxes are found both during the day and at night. During night time, you may have to use a dog to flush them out.

To hunt down a fox successfully, it’s worth using a thermal scope that allows you to view your target from a distance. Even if you prefer hunting from a close range, rather use a precision riflescope so that you don’t miss the shot.

There you have it! A round-up of most of the animals you can hunt at night. But before embarking on your night hunting venture there are a few things you need to keep in mind. Firstly, it’s important that you find out the hunting regulations in your state.

Secondly, never put yourself at risk. Be sure to always take a compass with you so that you don’t get lost out in the woods. Also, makes sure that you notify someone regarding where exactly you’ll be hunting before you set off.

Always try and scout the area beforehand. Keep a safe distance when hunting down dangerous animals. And lastly, take the best night hunting devices with for accurate shots.

With that said, are you ready to go on your night hunting adventure?