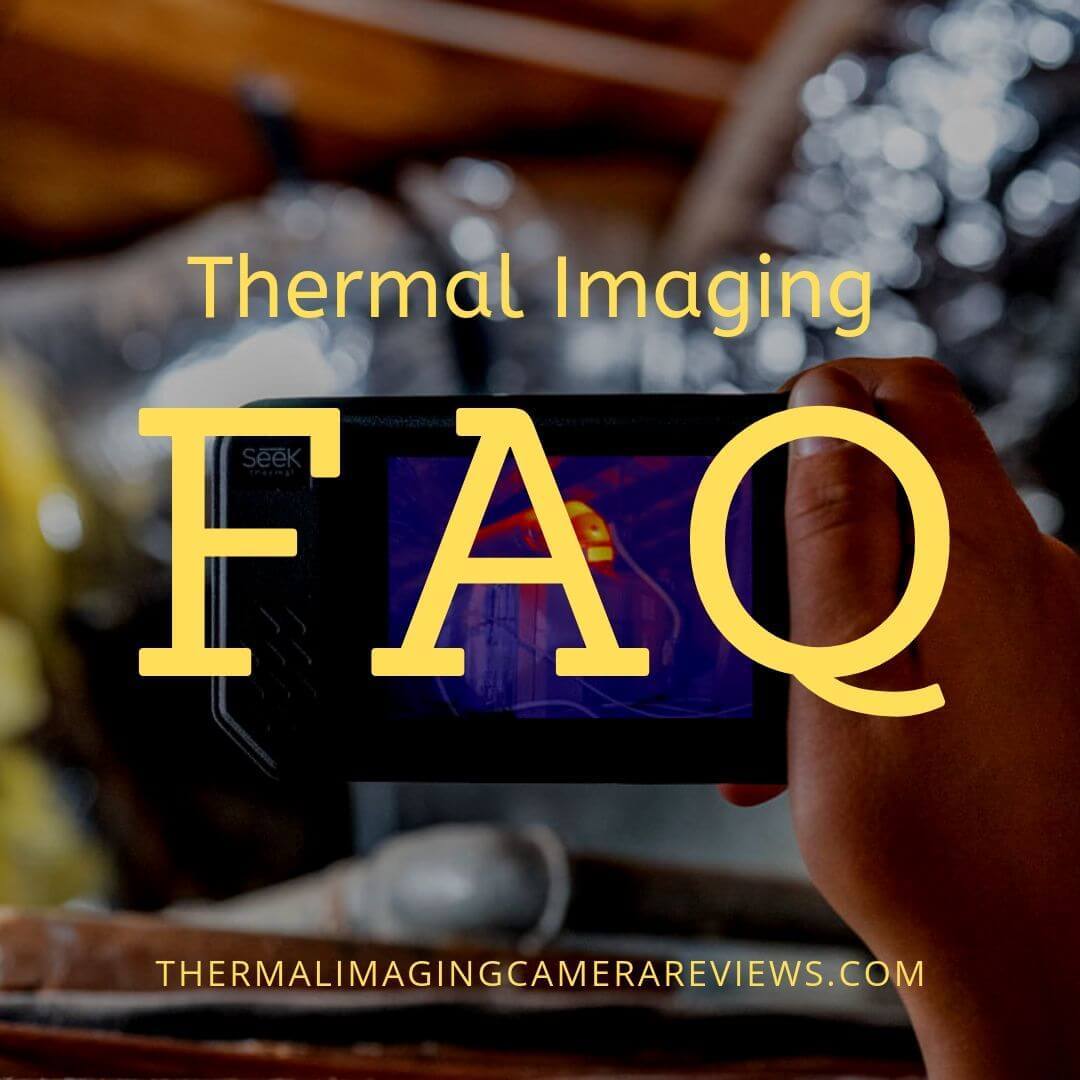 Thermal imaging is used in all sorts of situations:

If you’d like to know more about thermal technology and how it can help you perhaps you’ll find the answers you’re looking for right here.

What does Thermal Imaging Detect? 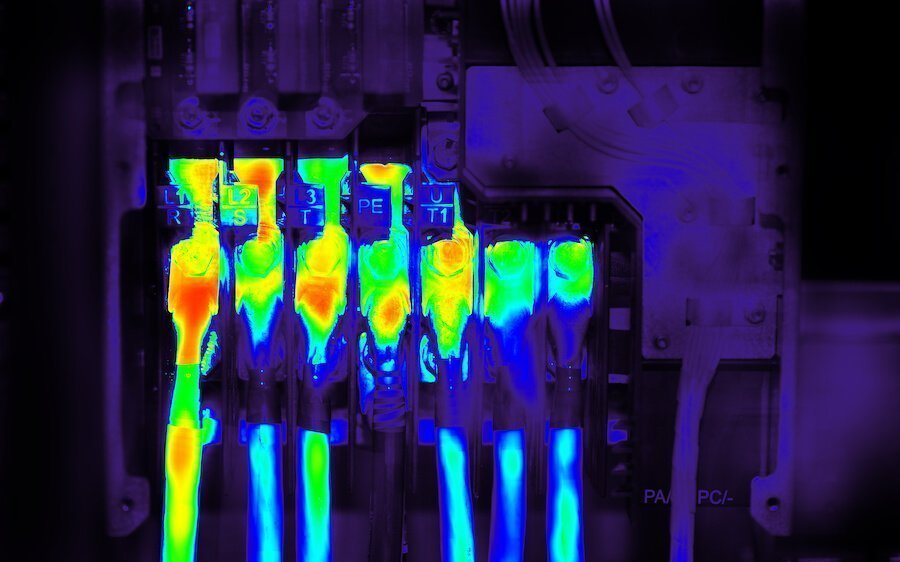 Thermal cameras are devices that detect heat energy and translate it into an image in order to examine an object or landscape. The thermal images are known as thermograms. The images are analyzed through a process called thermography.

Objects absorb, reflect and transmit energy at different levels. An object at temperatures above zero emits infrared radiation. This is how heat is transferred and detected by thermal cameras & it’s the reason these cameras can operate in complete darkness.

Even though infrared radiation is not visible to the human eye, the energy can still be felt. If you hold your hand over a hot cup of tea you’ll feel the heat emitting from the cup. A thermal camera can detect the radiation and convert it into an image we can see.

What is a Thermal Camera Used for?

Firefighters use thermal technology to detect body heat of trapped victims in a building. Thermal cameras help firefighters find trapped people through thick smoke and debris when they’re on a rescue mission. They also help firefighters navigate buildings that are full of smoke and allow them to see where the fire is coming from and if it is behind a wall or other structure.

Thermal imaging can detect icebergs and other vessels at sea. Navigators can also use thermal technology for rescue missions to find people who’ve fallen overboard.

The uses of thermal imaging on construction sites are important because the technology can be used to detect gas leaks. Thermal technology can even be used to see what type of gas is being emitted. The leak can easily be detected and fixed quickly.

Additional uses for thermal technology are as follows:

Because there are multiple sources of infrared (heat) energy it’s sometimes difficult to get an accurate reading of an object’s temperature. The images show a temperature approximation because the camera is using multiple sources based on the surrounding area of the object.

How Much Does a Thermal Camera Cost?

Cost all depends on the device’s specifications and features. The more features and higher specs the device has the more expensive it will be. It also depends on what application the thermal camera will be used for.

Marine thermal technology or medical thermology will be more expensive than standard devices. But if you’re looking for a standard thermal camera the price can range anywhere between $199 and $1500.

Which Thermal Imaging Camera is the Best?

The top brand on the market at the moment is FLIR. They manufacture a wide variety of devices for different applications such as:

Are Thermal and Infrared Cameras the Same?

Thermal devices may produce an image but they’re essentially sensors. Forward looking infrared produce images from the heat being radiated by an object and not visible light.

Heat (also known as infrared or thermal energy) and light are both parts of the electromagnetic spectrum. A camera that detects visible light won’t see thermal energy and vice versa.

Thermal cameras can detect small differences in heat (as little as 0.01°C –) and display them in shades of grey or other colors. Different materials absorb and radiate energy at different rates. A thermal camera will detect these differences and convert them into detailed images.

Sometimes infrared or thermal cameras are placed into the same category as night vision cameras/goggles. This is not correct as night vision devices use a light intensifying tube to magnify visible light (start light or other available light) 1000's of times which allows us the see the images. Nigh vision devices will not work in  total darkness whereas thermal imaging devices will.

What is a Thermal Scope? 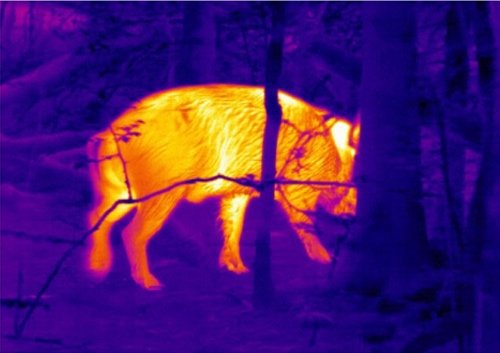 A thermal scope is a sighting device combining thermographic technologies to magnifying optics aiming reticles. These thermal scopes can be mounted on small firearms as well as larger and heavier weapons. Thermal sights are used for night hunting and military operations.

They’re particularly useful for nighttime hunting such as hog hunting. The differences in temperature between surroundings and other living organisms (animals) make it easy to detect sources of heat from the animal. It creates a high visual contrast between living organisms and the environment.

Can Thermal Scopes be used During the Day?

Thermal scopes detect radiation so there’s no visible light needed to produce an image. They can be used during the day and at night time. Humans and animals are warmer than their surrounding areas so a thermal scope is able to detect them at long distances day or night.

Various colors represent different temperatures. With thermal technology the higher the temperatures are the brighter the image will be. More advanced thermal optics allows you to invert the colors to differentiate heat intensity.

How Much Does a Thermal Scope Cost?

Using a thermal scope is a better option as you can use the device at any time of the day or night. Because of this, the device may be a bit pricier. Depending on your preference and the specs of the device you can pay anywhere from $1,200 to $8,000.

What is Night Vision? 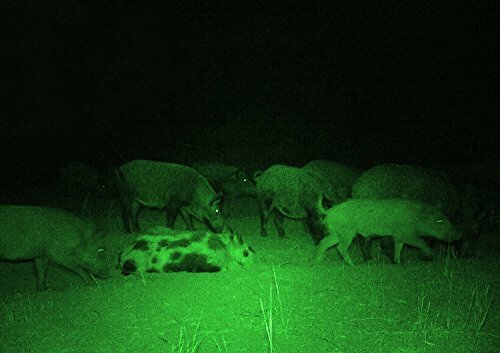 Night vision is the ability to see in areas with low light conditions. A device that allows you to see in the dark is essentially infrared technology. Night vision devices need enough light and contrast to produce a readable image.

If you’re hunting game or on a rescue mission at night, the moon and stars should provide enough light for you to detect objects using night vision. But in the absence of natural light, you can use IR illuminators to generate light.

A Gen 2+ system will give you 5,000 hours of use. Gen 3 systems can provide as much as 15,000 hours of operation. Clean it regularly and always put a cover on your device when you’re not using it. Your device could last a lifetime if you take proper care of it.

What is Digital Night Vision?

Thermal technology doesn’t quite allow you to see through walls or solid matter but it’s as close as you can get to x-ray vision. As you can see, you can use thermal cameras for myriads of applications such as hunting, building maintenance and for surveillance around your house.

Although thermal devices offer the same functionalities they all differ in terms of specs. Check to see what application the device is used for before purchasing your own thermal imaging device. Our comparison table can help you make your decision.