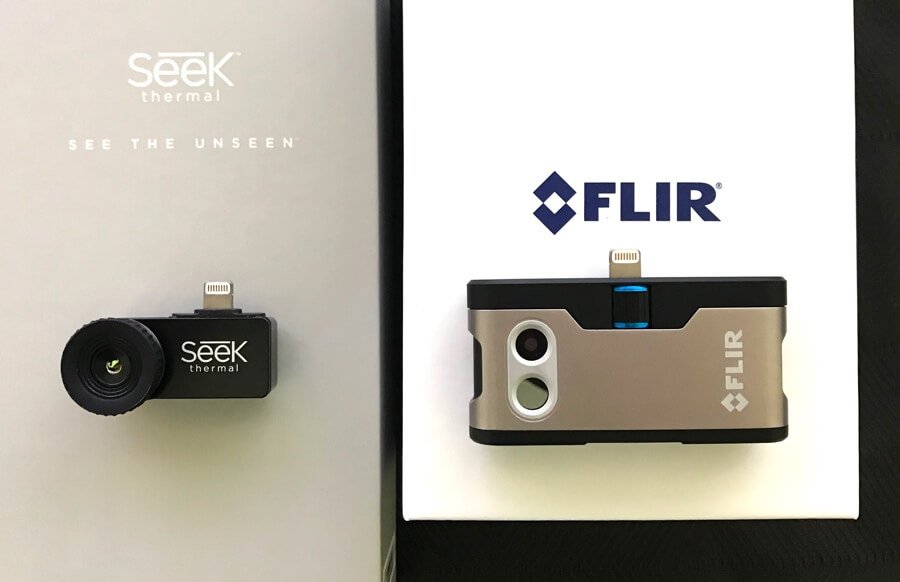 As technology has continued to improve and bring with it many more efficiencies thermal cameras for your iPhone and Android device have become a viable option for many applications. The two main players in this space are FLIR and Seek with each manufacturer having multiple models to choose from. Below are some of the main differences between each of the thermal cameras and which one might be best for your needs and budget. You can also view our homepage for other thermal imaging cameras and reviews.

You can use the Table of Contents below to quickly get the information you need on FLIR vs Seek Compact Thermal Cameras. We have placed the comparison table first so that you can quickly see the differences between the cameras and models.

FLIR ONE vs Seek Compact - Our Recommendation

Now that you have seen the specs for each camera which one is right for you? While everyone’s situation is different depending upon what is the most important factor in your buying decision we have put together some simple guidelines to help you below.

If you are still unsure going through our quick list then all the detailed information about each model is below.

FLIR and Seek are companies that specialize in thermal imaging hardware and software for commercial and residential use. FLIR is older having been established in 1978 and has continued to innovate within the space now having a thermal imaging solution for virtually every industry and use case.

One of FLIR’s most revolutionary innovates is their MSX technology which overlays thermal images into standard images resulting in high resolution images and detail. FLIR’s warranty (2-5-10) is also industry leading; buyers know FLIR stands behind its products and builds them to exacting specifications.

Seek while a much newer company, founded in 2012, has industry veterans leading it and approaches the space from a much more narrow but focused view than FLIR. Also of interest, is that the founder of Seek (who is a serial entrepreneur) has sold prior companies he has built to FLIR.

Seek focuses exclusively on the consumer market which has allowed it to devote all time and capital to making their products the best they can be; although they do not have the resources that FLIR does. Recently, Seek has started developing thermal imaging cameras for security and law enforcement use.

What Are The Different Models? The FLIR ONE now in its 3rd generation remains the most affordable thermal imaging camera in the FLIR line up. This is a break through product that takes the price point just around/under $200. To compensate for a fairly low thermal resolution (80x60 pixels), FLIR One is equipped with its own visual camera (1440x1080 resolution) and uses a combination of thermal and visual camera to create one easy to understand HD picture. You can set the camera to display only the thermal image but because the thermal sensor resolution is so low it is always better to have MSX enabled. The updates made to the FLIR ONE Gen 3 make it the best choice based on price UNLESS you need to detect higher tempatures which the Seek Compact will let you do.

The FLIR ONE thermal camera is powered by its own battery which is good enough for up to 1 hour of operation time, and takes around 40 minutes to charge. If you are looking for a cheap thermal camera with good image quality, the Flir One does the trick thanks to the combination of HD visual camera and thermal camera. 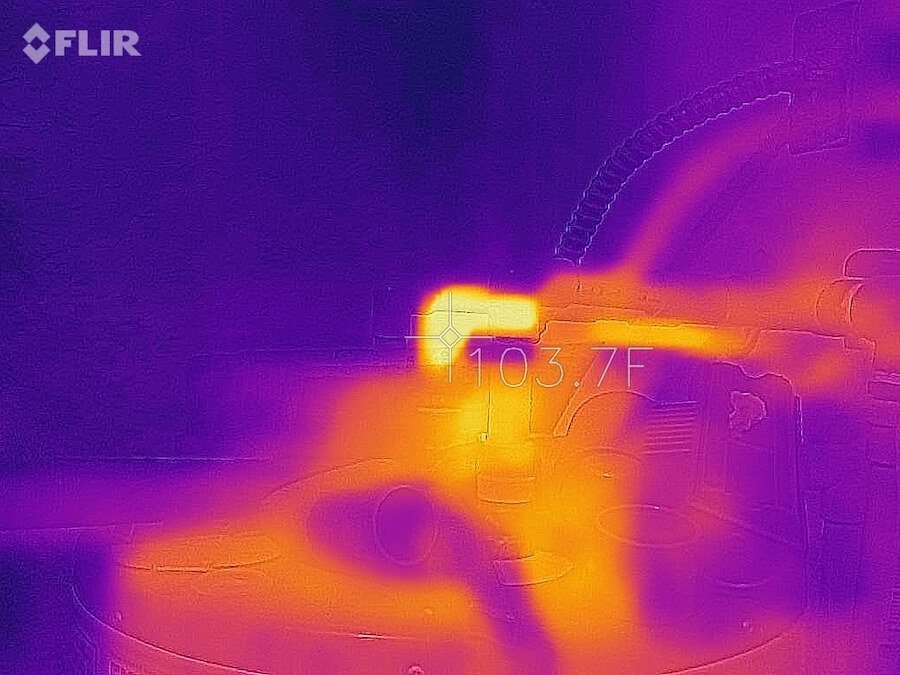 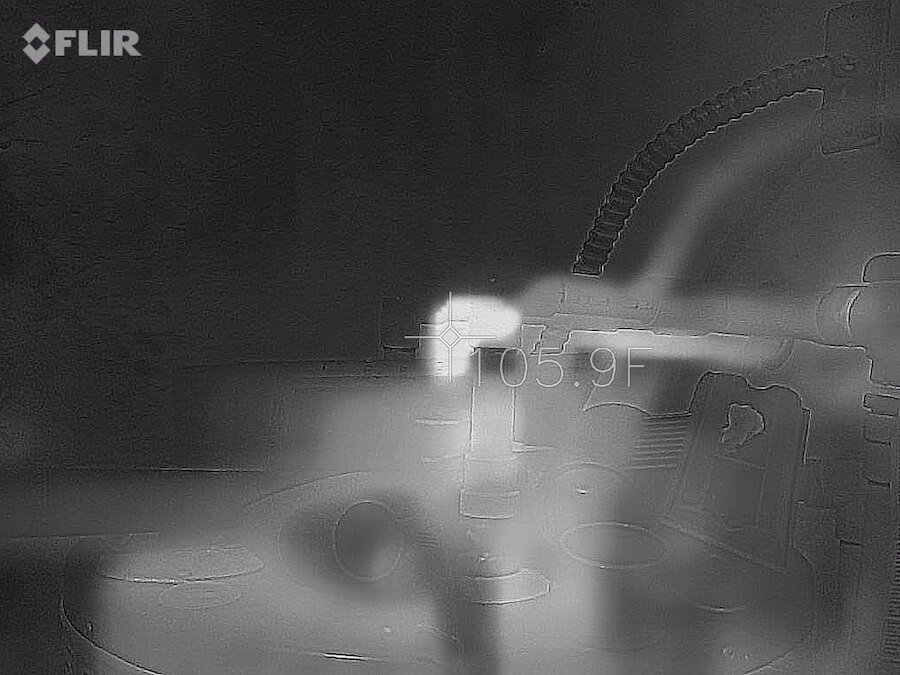 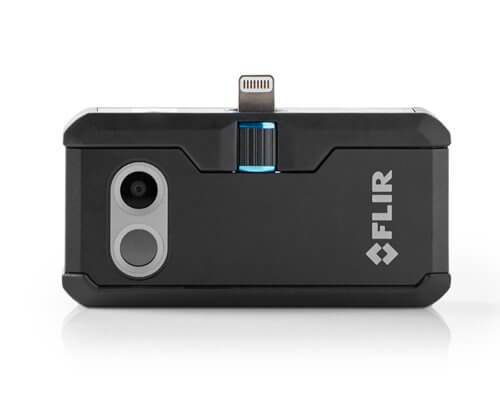 Costing twice as much as the FLIR ONE, FLIR ONE PRO has many enhancements over its cheaper version. Let's compare Flir One vs Flir One Pro and what you get with the PRO version:

Again, remember that the FLIR ONE Pro phone attachments have their own separate battery that must be charged and do not run off your phones battery. Flir One Pro models are available for iOS devices, Android Micro USB as well as the new USB-C standard.

Flir One Pro comes with a high resolution thermal sensor and the same HD visual camera giving you much clearer thermal images. For those of you looking to buy a compact thermal imaging camera for professional use the FLIR ONE PRO is a great choice! The Seek Compact thermal imaging camera is Seek's entry level cell phone attachment. The main differences between the Seek Compact and its FLIR ONE competitor are that the Seek Compact only has a thermal imaging camera and no visible light camera. The Seek thermal camera also has a manual focus which allows you to fine tune to focus on the specific areas you want to however it is not a quick as the FLIR ONE’s fixed focus. Additionally, the Seek Compact (and PRO) are powered by your phones battery and do not have a separate battery to charge. This is both good and bad as you do not have to worry about carrying two chargers but depending upon how much you use your phone and the Seek attachment you may deplete your phone's battery quicker. The Seek Compact has higher temperature detection rage (-40°F to 626°F) and a higher native thermal resolution, both  significantly higher than the FLIR ONE. However, the FLIR ONE's MSX technology does help to deliver a sharp image.

Ultimately, the edge for entry level thermal camera (not for commercial use) goes to the Seek Compact if you need a higher temperature detection range and smaller form factor. If you need clearer images and don't mind a slightly bigger camera the FLIR ONE is a better choice. 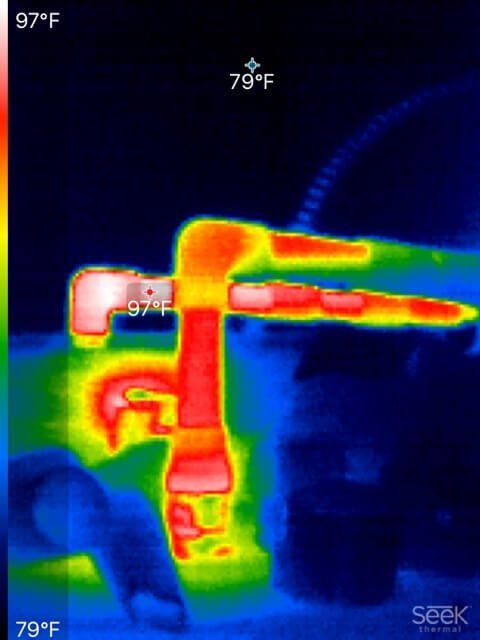 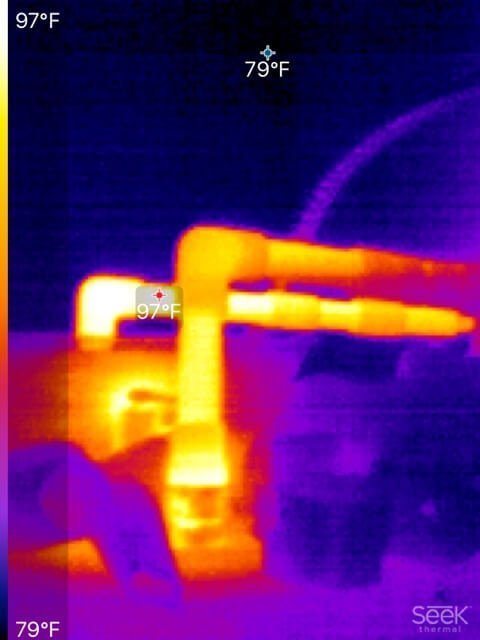 Things to Keep In Mind Buying FLIR ONE:

Will My Phone/Tablet Work With The FLIR ONE?

Most modern iOS and Android devices will work with the Flir One attachment. Recently, Flir updated the line by adding USB-C compatibility which is used by the latest Android phones. You can find the complete compatibility list for FLIR ONE cameras on their website.

What Is The FLIR ONE Range And Resolution?

Two of the most common questions are what is the range of the FLIR ONE as well as what is the resolution? On a clear day with good weather you should be able to detect a person over 400 feet away provided you have a clear line of sight to them. If you are trying to spot large animals, you might be able to detect them further out. The minimum distance is 12 inches. While this detection range is not as long as the Seek Compact the reality is almost all of the time you will not be trying to detect people or animals outside of this distance with this type of thermal camera.

FLIR ONE vs FLIR ONE PRO - What Are the Differences?

If you have decided to go with a FLIR Thermal Imaging Camera you now need to decide which model, you are going to go with. The main differences between the FLIR ONE and FLIR ONE PRO are the PRO’s increased thermal resolution, higher temperature  detection range, increased FOV and ability to view thermal image only. The higher thermal resolution of the Flir One PRO is 4x the resolution of the standard model and produces even clearer thermal images. The pluses justify the extra cost and if you are looking to use the camera in semi-commercial and commercial use then the FLIR ONE PRO is the way to go.

For home owners and hobbyists who are looking for the most cost effective thermal camera the FLIR ONE is an excellent choice at a great price point.

Will My Phone/Tablet Work With The Seek Compact?

What is the Seek XR?

The Seek XR has the same specifications and LOOKS THE SAME as the Seek Compact except the XR has a narrower field of view (20 degrees) so that you can get almost double the viewing distance - 1,800 feet versus the Seek Compact's 1,000 feet range. What Can I Use My Thermal Imaging Attachment For?

So, what exactly can I use my thermal imaging camera for? There are literally thousands of uses some of which are: